Meet the phenomenal Family and Ministry of . . .
"The Hendrys on the Move"
Jim, Shelley,
Joel, Rebekah, Jonathan, Grace, Nathaniel, Micah
To schedule the Hendrys for a meeting within a hundred miles
of Bedford, Va, Call 540-425-2185 or Email Shelley Hendry 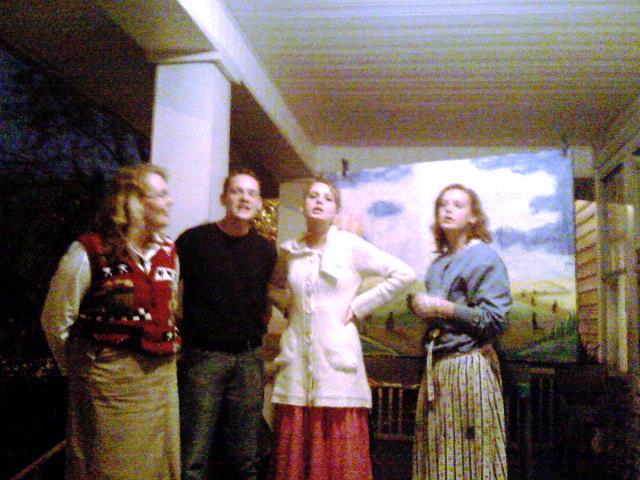 What do soup kitchens, halfway houses, Christian bookstore openings, YWCA luncheons and children's groups, radio interviews, lots of pizza and a set of triplets with chalk-covered hands and clothes have in common?
All were part of the Hendry triplets chalk talk fall outreach in Winston Salem North Carolina .
On Thursday October 29th the family drove down from Bedford VA and met Bill Mixon (Christian businessman from Winston and friend of the family who helped jumpstart the ministry, provides ongoing support and who coordinated the tour) who escorted them all over town and provided accommodations and on-site help and administration) Rebekah and Grace rendezvoused with their brother Jonathan had already gone earlier in the week to resume work on the documentary he is working on with David LeGrand on the dean of Gospel Chalk art: Ding Teuling!
For three day the Hendry triplets shared Gospel stories and sang for a variety of audiences as they shared the love of Jesus for groups young and old, indoor and outdoor, large and small in the beautiful fall
weather surrounded by the sights and sounds of one of North Carolina's oldest cities:
They began the work on Thursday when the Hendry triplets, together with their mother and younger brothers, presented a music program of hymns and hymn histories for a luncheon at the YMCA where they joined ladies from Hawley House and the ladies from Project New Start for their weekly luncheon. 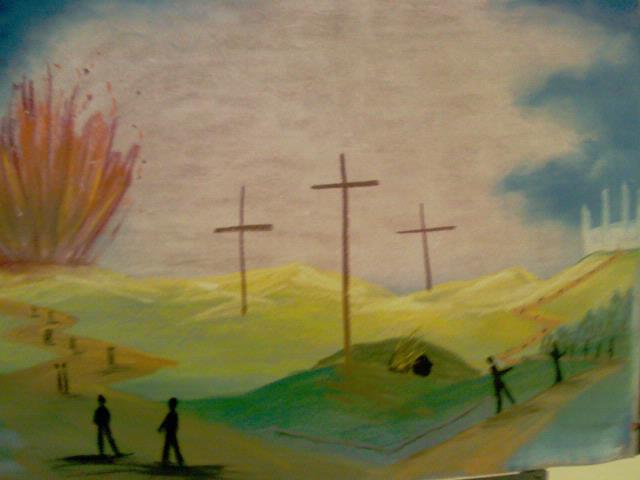 Following the luncheon the Hendry triplets presented the Gospel chalk talk "The Two Roads" for a lively group of schoolchildren in day care at YWCA. Rebekah Hendry drew the left side of the path leading to destruction while Jonathan (a south paw artist) drew the right path leading to eternal life.   The enthusiastic group peppered them with all sorts of questions about the details not only of the drawing but of the pathway to Heaven--what a privilege!!!
The sincere interest of the children is always a joy for those who love to work for children. New Testaments were given to the children by Mr. Mixon (a Gideon) and all were encouraged to read them to learn
more about the Gospel Highway.

The next morning dawned early as the Hendry girls presented this same drawing ( with the girls drawing the scene together) for a group at Bethesda Center: a shelter for the homeless. The story of the cripple Mephibosheth was used to illustrate the love of God to take all who are crippled with sin to feast in Heaven at the King's Table. Mr. Mixon served coffee and refreshments while The Hendry girls joined with their mother both singing for and with the audience. Special song sheets were distributed as a reminder of the day and as possible bookmarks for folks to keep in their Bibles. The group's interest was held by the drawing--some going and coming and others remaining for the entire presentation.

Jonathan then joined the group that evening (he had been plugging away on the documentary) to provide music and fellowship at the Shepherd's Table soup kitchen. The triplets sang while Rebekah played the piano and they visited and ate with the men who came and sought to provide a Gospel outreach and encouragement to the men. The Hendrys have been there many times before and grateful for the opportunity to reach out.
Saturday morning the group made their way down to Guillon's, a Christian bookstore, for their grand opening. Jonathan chalked both inside and outside the store while patrons shopped--the number growing steadily all day. He improved the chalk drawing of the two roads by adding the Cross over the pathway to Heaven. Then the triplets were interviewed on   WTRU   for Robby's Hobbies, a , weekly radio show,, for the second time as they shared about both their chalk talk ministry as well as their family's living history work. 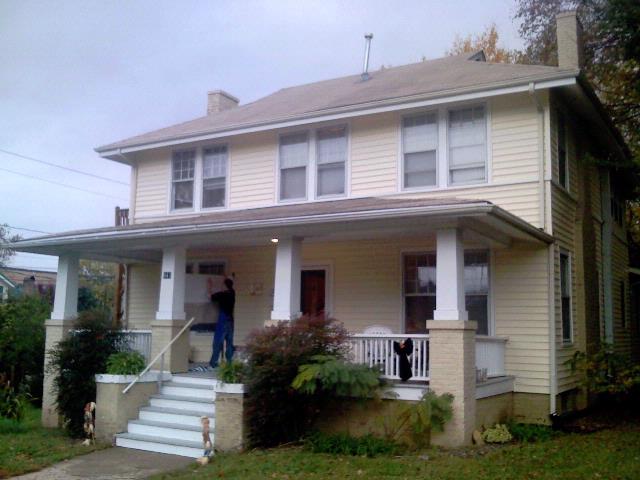 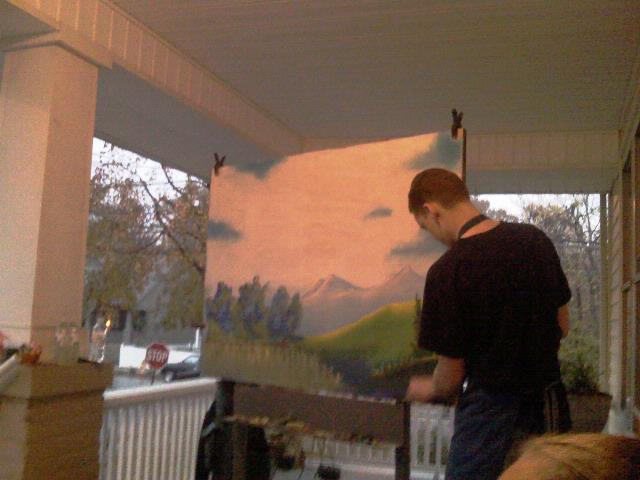 Finishing the evening was a reunion with their friends at Hawley House--a Christian halfway house for women who are seeking to overcome substance abuse and who have welcomed the Hendrys, together with the Mixons, several times before. They enjoyed pizza together and then filled up chairs on the front porch for Jonathan's drawing of a beautiful nature scene with the talk “His Eye is on the Sparrow” which recounts many inspirational and faith-building vignettes from the life of Corrie and Betsey Ten Boom, Dutch Christians who were imprisoned for hiding the Jews from the Nazis during World War II.
During the drawing different ladies from Hawley House distributed candy and Gospel literature to children who came to the house trick or treating....Following Jonathan’s drawing the drawing Rebekah drew the two paths. The triplets finished the evening (and the fall outreach) with singing for the ladies and then (after filling the van with much-appreciated boxes of donated food for the Hendrys) the family stuffed into the overflowing van (crammed to the ceiling with equipment and many boxes of much-appreciated donated food and clothes) with overflowing hearts of appreciation for the opportunity to share the inspiring medium of Gospel chalk art with so many.
This article is dedicated to the instructors and sponsors who have helped and support the Hendry triplets at Alpha Arts: Mr. and Mrs. David LeGrand, Matt Bowman, Peggy Esher, Ray Dombeck, Esther Fry, Rod Snow and the families in South Carolina, Virginia, and North Carolina, who have donated easels and equipment   We hope this article will provide ideas and inspiration to our fellow artists and show our appreciation for all who have helped us.

To God, the Author and Creator of all beauty and to His son the
Author and Finisher of our Faith we give glory and thanks.

Starting in January of 2010:
Peggy Esher is offering to critique your chalkwork over e-mail. She will write back and tell you your strengths and what you can do better, and how to improve what you've done. She thought of this idea as students seem to be writing her always, sending their pictures to her from their digital camera's and asking her what she thinks. Peggy is Ding Teuling's Assistant, and does this same critiquing in their seminar classes.
This generous service is FREE to you. She loves the Lord and Chalk Artists.
Peggy Esher>>drawing_others_to_christ@yahoo.com
(please use UNDERSCORES between the first 3 words,not dashes)