The MAGIC of STENCILS!
Just what you have been waiting for.
Yep, Kerry Kistler has done it again. He has a FREE book you can download
on your computer enlightening you on how to prepare hidden black light chalk pictures using STENCILS.

WHY USE STENCILS:
1. Once you have prepared the stencil, the proportions will always be right.
2. It is faster and easier than free hand. You will save an immense amount of time.
3. It relieves the stress of trying to remember all the details and correcting mistakes.
4. Kerry has a unique method of apply the chalk through the stencil. Be sure to check it out in the book.

Are hidden drawings worth all the trouble?

(Introduction to Kerr'y book.)
Hidden drawings. Invisible drawings. Phantom drawings. Call them what
you will, they are like the prize in a box of Cracker Jack which every audience loves
to discover. Hidden drawings elicit a gasp of wonder and delight because they
sparkle with the mystery of a magician’s stage illusion. In fact I often feel a twinge of
guilt when I reveal the “secret” of hidden drawings to a spectator who begs, “How
did you do that?!”
But, to be honest, I have a love-hate relationship with hidden drawings. I
love how they strengthen the message of the finished drawing. I love the response
which they produce from young and old alike. I love that magical moment under the
black light when I get to “pull a rabbit out of the hat.” Yet, I hate the demands of
preparing hidden drawings. . .the preprogram work. . .the extra hours. . .the difficulty
of repairing mistakes.
Some chalk artists have tried to find various shortcuts that solve this lovehate
dilemma. Wanda Cumings Vincent describes creating her hidden drawings by
using special invisible, fluorescent lacquers which are painted on the paper. However,
she vacuums the drawing off the paper after each program and reuses the prepared
painting over and over.I prefer to leave the drawing behind with the group as a
gift. There are always people who want the finished drawing.
Some chalk artists are projecting hidden pictures onto their finished drawings
using various kinds of projectors.But, what happens when you tell the recipient
of the drawing that they will never see the hidden picture again because it only
exists in your projector?
I have tried to find a solution that will help me get to the finished hidden
drawing faster and easier - a solution which produces consistent, repeatable results
every time. Voila! Enter the stencil. I first began experimenting with this technique
around 1997 but I would be amazed if I was the originator of this method. Surely,
others have discovered and are using this same time-saving technique. In fact, Gloria
Kohlmann developed this approach around 2004 quite independently of me and
now markets a modest line of stencils.
And, if you prefer to freehand your hidden drawings, stick with it! There
are many resources available to aid you in producing elaborate, freehand, hidden
drawings - including David Teuling’s Picture Resource Club.This booklet shows just
one method of producing hidden drawings - using a stencil. Hey, give it a try! If done
correctly, the audience should never know the difference.

Examples of stencil usage below 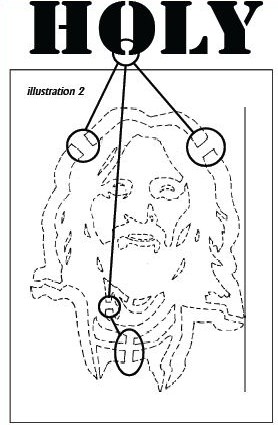 You can obtain an electric STENCIL CUTTING PEN  from Jo-Ann Fabrics at the following Link:
Creative Hot Marks Tool Kit  It comes with several points, so it works best to use the pencil point
rather than the knife point.

You can get the acetate or DuraLar sheets from your local art/hobby/craft shop or you can go online to
Hobby Lobby and find the one nearest to you and go there or call them to ship you some.

There is so much more including 120 PATTERNS for stencils to make quick invisible drawings.
Click Creating Hidden Chalk Art Pictures the Sneaky E-ZWay